I know it's been awhile since we've surfaced development footage of Operation Brasnodar, but that doesn't mean that we haven't been hard at work! We've done lots of updates during December and January and are very excited to share them with you. As always, if you are interested in watching the game development live then follow me on Twitch. If you prefer more frequent "mini" updates then follow What Up Games (@whatupgames) and/or myself (@yecats131) on Twitter.

We decided that it was well overdue to build out the operative's HUD. In addition to being able to view the details of the missions that need to be completed, each diamond will rotate towards the general direction of the mission's location. Quail operatives will also be able to monitor their speed with the handy speedometer that is provided. Finally, what HUD wouldn't be complete without the ability to taunt the other side via chat! 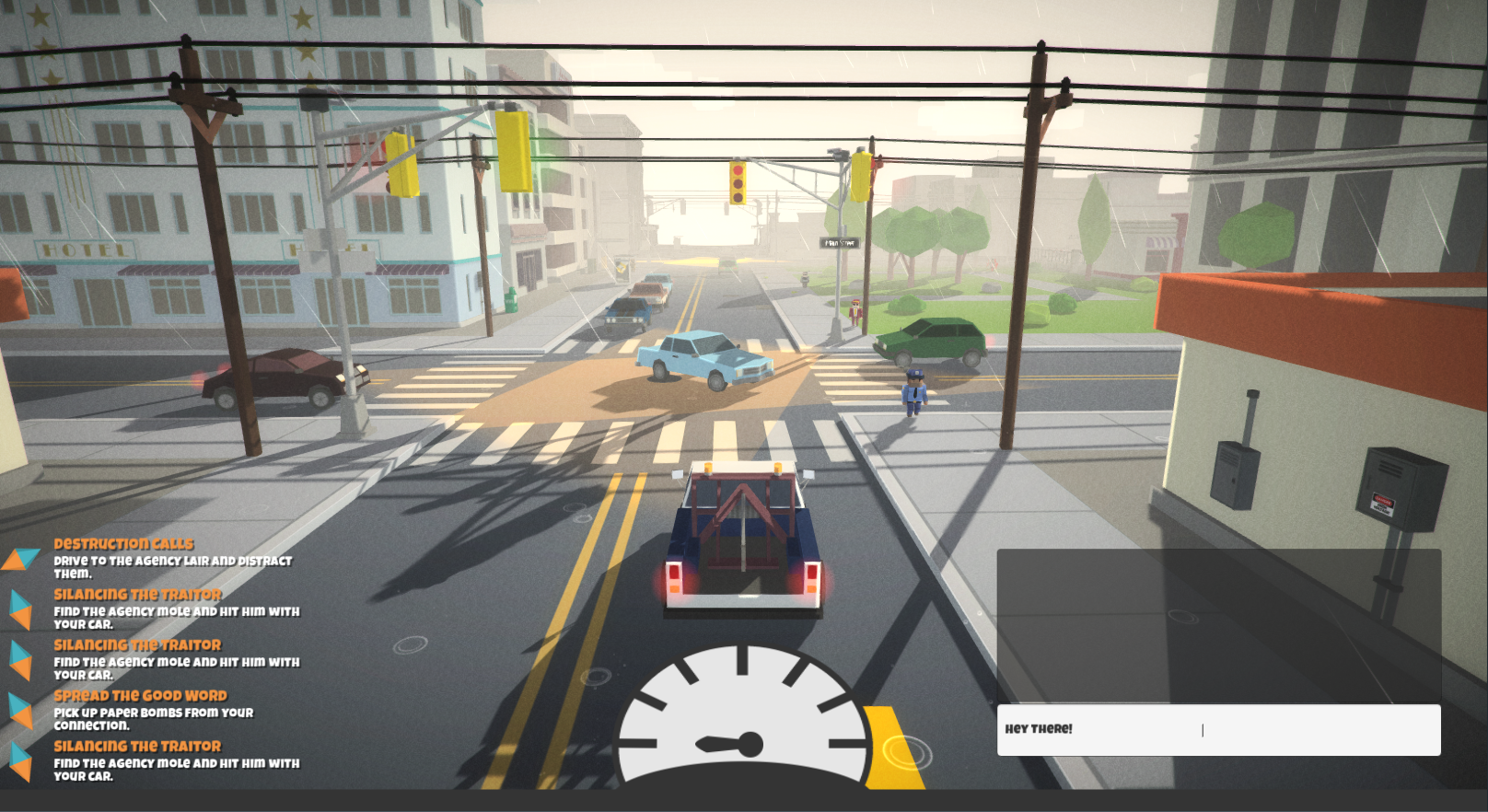 Operation missions have gotten a huge face lift on both the visuals and core mechanics. There are now five starting missions that the operative must complete while trying not to be detected. To aid in the swift completion, they will now receive more detailed instructions and status reports. Additionally, it is now possible to see the effects as you progress as the city has become more animated. Beware though! The mind controlled citizens notify the Agency whenever a mission is successful.

We are still continuing to add new missions, many of which will have higher difficulty for skilled operatives. We've highlighted two of the missions down below.

Lair Silencing and Destruction Calls are completed after the operative has taken the steps necessary to blow up a known lair of the Agency that is closed for renovations.

While completing Spread The Good Word, the Quail operative will drive to multiple locations in the city in order to deliver a paper bomb full of propaganda.

We have been hesitant to show off the game play around the Agency as it is still very early in the development for that side. In the last few months, the Agency has received lots of behind the scenes improvements around performance, mini-games and camera handling on the monitors. I'd be remiss if I didn't mention that the visual aspect of the Agency is still going through the prototype phase.

The Agency was able to scrounge up a bunch of cheap monitors for the assignment. To aid in monitoring the city, the agent can tag a car on the monitor and follow it as it moves around the city. Once the Quail gets within a proximity of an active camera it will highlight a red line indicating the direction of the car.

The main headquarters inside Brasnodar is still running on outdated electronics. Very. Outdated. As a result, the Agent will need to able to quickly repair the monitors while keeping an eye on the city. Since the technology is so primitive, the monitors tend to only have a few things that can go wrong. Two, to be specific. We're confident that they'll start breaking in different ways fairly soon.

The majority of our investments in Operation Brasnodar over the last few months has been focused on network gameplay and aesthetics. While we did have the ability to play 1v1, there was a lot of work that still needed to be done. The first thing we decided to implement was match making support so that players can easily find and host new games across the internet. Once matchmaking was wrapped up, we moved towards general network visual improvements such as syncing NPCs and mission animations. We also setup the world to generate random props throughout the environment. During the last few months the existing code was adjusted to enable more than two players to connect, paving the road for team vs team. We also did significant performance enhancements in which we were able to reduce network traffic by 85%!